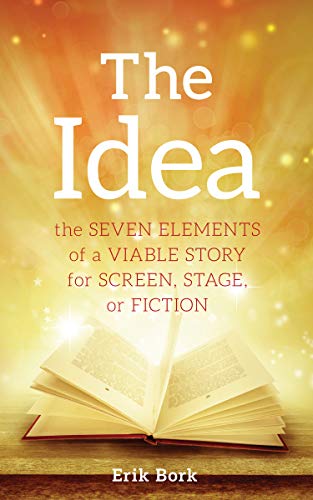 Most screenwriting books tend to focus on story structure, scene writing, navigating the business, and other parts of the craft that come AFTER the initial choice of the central concept for a story. Multiple Emmy- and Golden Globe-winning writer/producer Erik Bork (HBO’s Band of Brothers) takes a different approach. His experience in the industry and as a screenwriting professor and coach have led him to recognize that it’s the selection of the initial idea that is the most important part of the process — with the most impact on the project’s chance of success. And as Mr. Bork knows from experience, this choice takes a lot more understanding and work to get “right” than it might seem.

Most screenwriters and fiction writers have difficulty getting their work read and accepted by agents, editors and producers mainly because their idea for a story presented in a query or pitch doesn’t excite these “gatekeepers” like it would need to, for them to want to engage. And when they do read the whole story, their core reasons for “passing” are usually also about the basic idea (although lack of professional-level execution matters, too). But writers are usually in the dark about this, not realizing that the project they spent months or years on had fundamental flaws on a concept level, in the eyes of the people they most hoped to impress with it.

But even the best fiction writing books and screenwriting experts tend to move quickly past the crucial step of choosing a viable idea, to get to the specific plotting and composition of it, because there is so much to master in those later parts of the process — which feel a lot more like “writing” than developing and mulling over potential story concepts.

Professionals, though, tend to understand the primacy of “the idea,” and learn that there are certain key elements in story or series premises that really work, and which are worth investing time and energy in. And that’s what The Idea focuses on — laying out what those specific elements are, and how to master them.

While its concepts originate from the author’s screenwriting experiences, they apply equally to commercial fiction writing, playwriting and other forms of “story” — because the focus is on what makes an underlying concept compelling enough to appeal to a substantial audience or readership.

The “Seven Elements of a Viable Story” in The Idea form an acronym for the word PROBLEM, since every story is really about one, at its core.

Each chapter focuses on one of these seven deceptively simple-looking aspects of a strong story, which are anything but easy to master. Mr. Bork highlights his own struggles as a writer, and his arrival at an understanding of how each of these elements works — and how to know if one’s idea really succeeds at each of them. A special section devoted to television writing (and its unique attributes) ends each chapter.

Whatever your education and background in writing or story, this book and its unique focus contributes foundationally useful information not covered elsewhere — which may be the missing piece that leads to greater results, both on the page and in the marketplace.

The Norton Field Guide to Writing: with Readings and Handbook (Fifth Edition)

The Blue Book of Grammar and Punctuation: An Easy-to-Use Guide with Clear Rules, Real-World Examples, and Reproducible Quizzes